This historic links is a marriage made in golfing heaven

Winston Churchill one said “this is a long speech because I’ve not had time to prepare a short one”.  That feels like my dilemma in writing about the wonderfully crafted golf course at Lundin Links; what to leave out?  I say the golf course “at” Lundin Links, because that is actually the name of the town, which sits on the southerly Fife coast about 12 miles south of St Andrews, where the Lundin Golf Club is based.  I think it’s the only place in the world where the town has the more appropriate golfing name than its golf course! 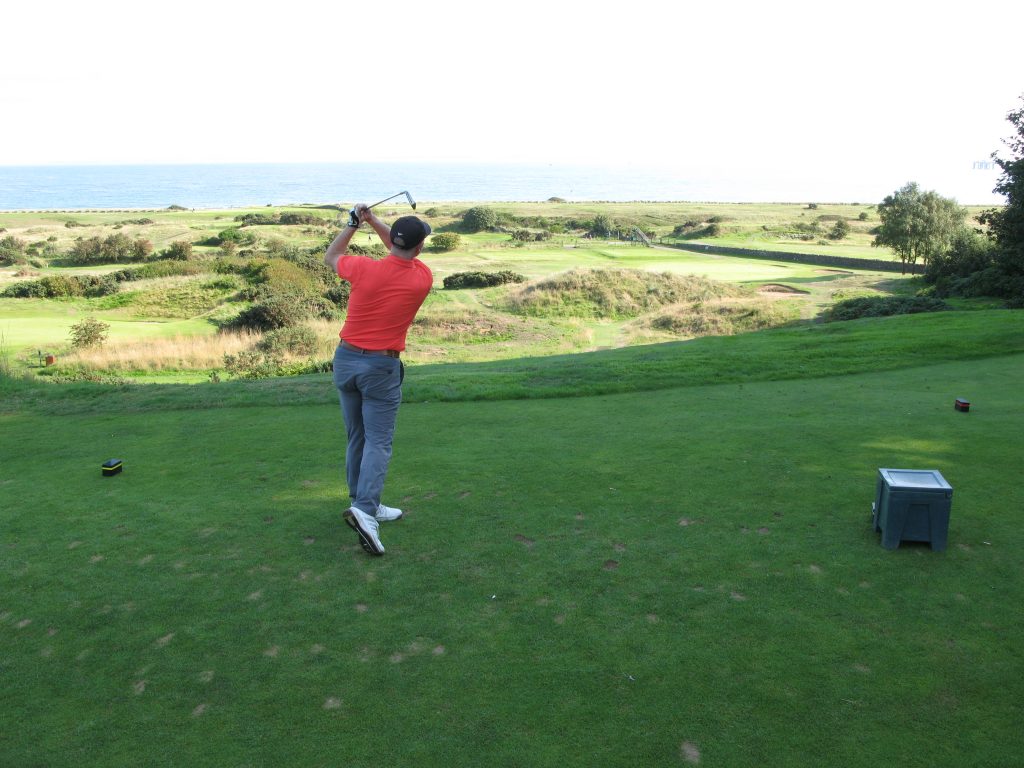 This naming conundrum is aesthetically appropriate because Lundin golf course poses a few other riddles.  Along with the adjacent Leven Links (the name of the golf course by the way, not the town, which is simply called Leven; au contraire!) it had the first ever 18 hole golf course with 18 separate greens, established in 1868.  That original 18 hole layout, 9 holes of the current Leven Links course plus 9 from Lundin, separated by the Mile Dyke, is still played, but only once per year in a competition to mark its history.  I covered the history of the split in the courses fully in the Leven Links blog here. 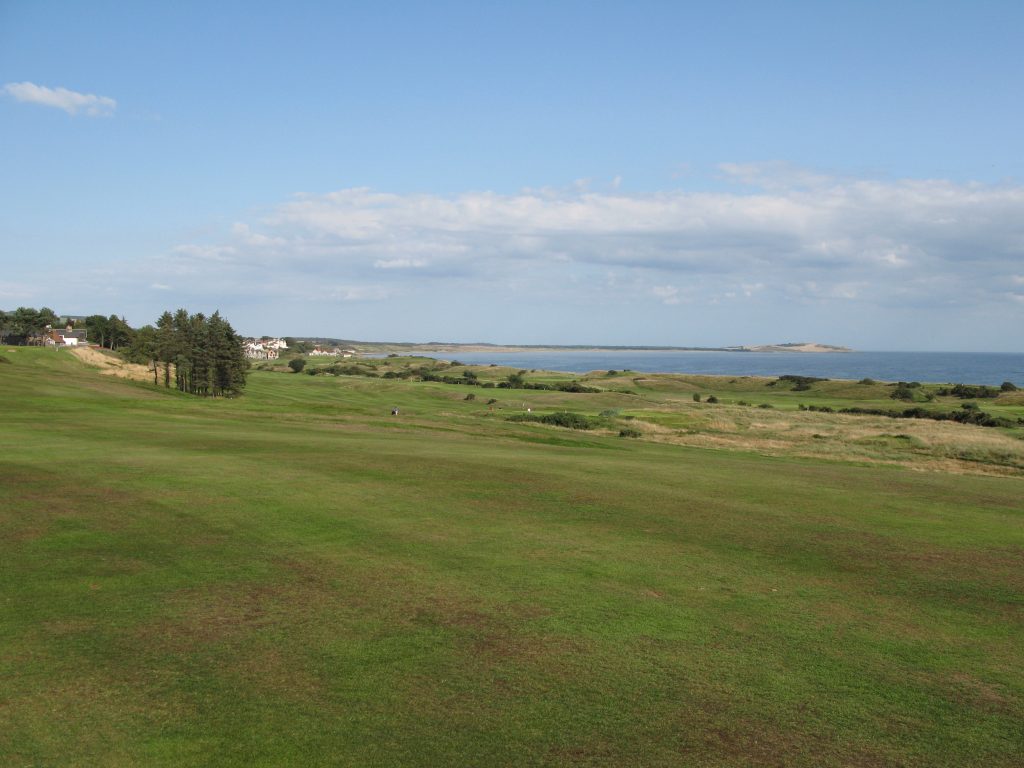 View across the Lundin course from the 13th fairway.

The real riddle at Lundin was the architectural one given to James Braid, who was tasked in 1908 with adding 9 holes on the inland side of the 9 holes crafted by Old Tom Morris, to leave us with the current 18 hole layout.  The resulting course is an absolute beauty, and I’m sure Braid tinkered with the bunkering of Old Tom’s holes as well.  Old Tom’s holes are now the first 5 and last 4.

The course is a nice length at about 6400 yards; not long by today’s standards, but with some fascinating decision making, especially from the tee.  Until very recently it was used for final qualifying when the Open was staged at St Andrews, a measure of its quality and condition. 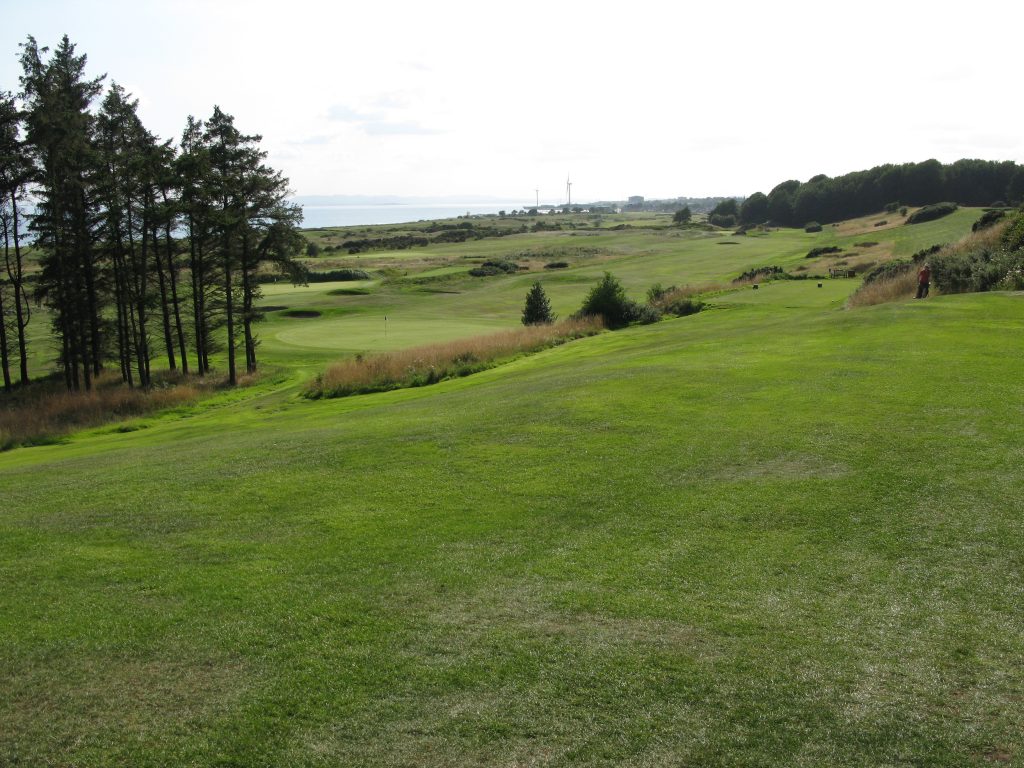 View from the 12th green at Lundin, looking towards Leven

The course was in excellent condition when I played, as a guest of local member Eric Brown and his wife, Moira.  I ungraciously won the “6 point per hole” match play game, although it was nip and tuck most of the way round.  My 9 pars off my 16.8 handicap did rightly elicit a self induced “bandit” conversation, albeit my 3 lost balls (1 resulting in an 8 at the par 4 18th), meant that my 36 points on a fine day would likely have been only in the handicap buffer zone!  That’s my defence anyway M’Laud!

Enough about me, the golf course is the star here.   It’s also a good time to introduce readers to Golf Club Atlas a non commercial web site run by and for golf course architects, where you can find some excellent reviews of many of the worlds great courses.  Being reviewed by Golf Club Atlas is a measure of a course’s pedigree, as well as giving great insight as with their entry for Lundin.

The first 4 holes are classic links holes, played normally into the prevailing wind, with OOB along the left with the beach awaiting a wild hook.  The first is a difficult 400+ yards par 4, with a mid to long iron needed to an uphill plateaued green;  the second, a shorter par 4, requires good judgement to stop short of a fairway burn with your tee shot;  then the 3rd, another short par 4, presents a challenging drive to miss several fairway bunkers.    The 4th, however, is where many a round will come unstuck.  Any time a James Braid influenced course has a stroke index 1 hole without any fairway bunkers, one needs to probable play it as a par 5.  I failed to adhere to this plan, and ended up hitting a decent second shot with a hybrid to the right on the green and never saw it again – whether it cleared the deep burn I will never know! 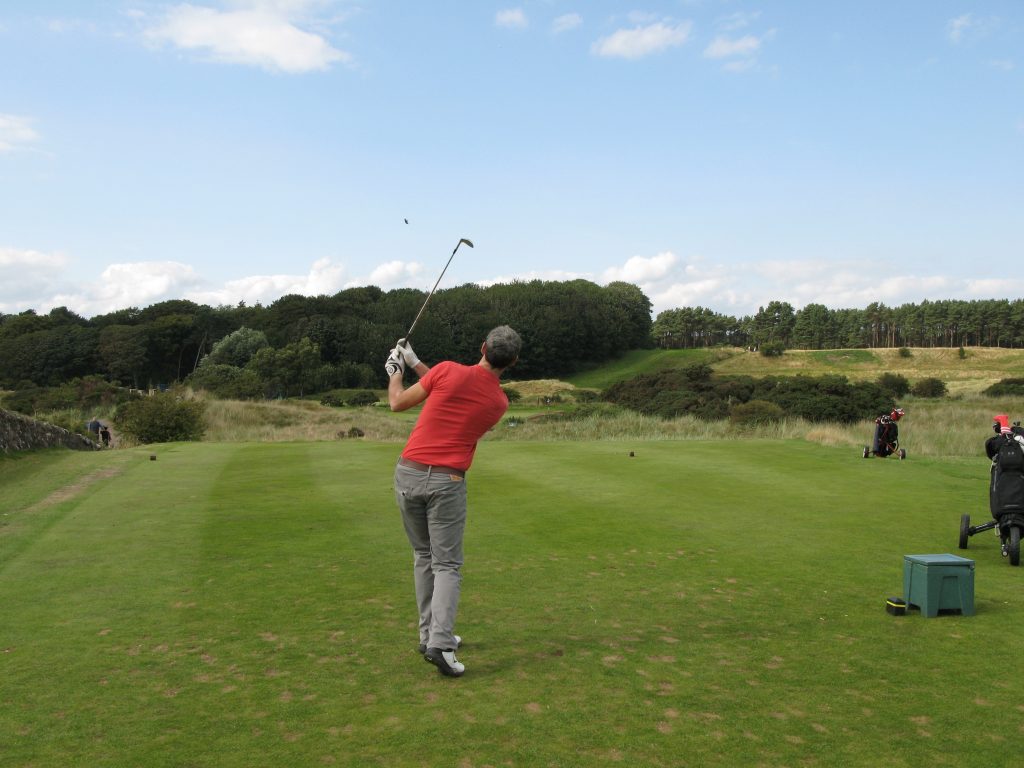 Eric Brown playing at the par 3 5th hole, one of only 2 holes at Lundin not playing in the coastline direction.

After a relatively short par 3 5th, you leave Old Tom’s legacy and move to the other side of an old railway line that slices the course in half, and play the 9 Braid holes, the first 3 of which have the railway as OOBs to the right.    By the time you have played the 6th and 7th, you might also have picked up another clever feature of this course – the short par 4s tend to have very tricky greens. 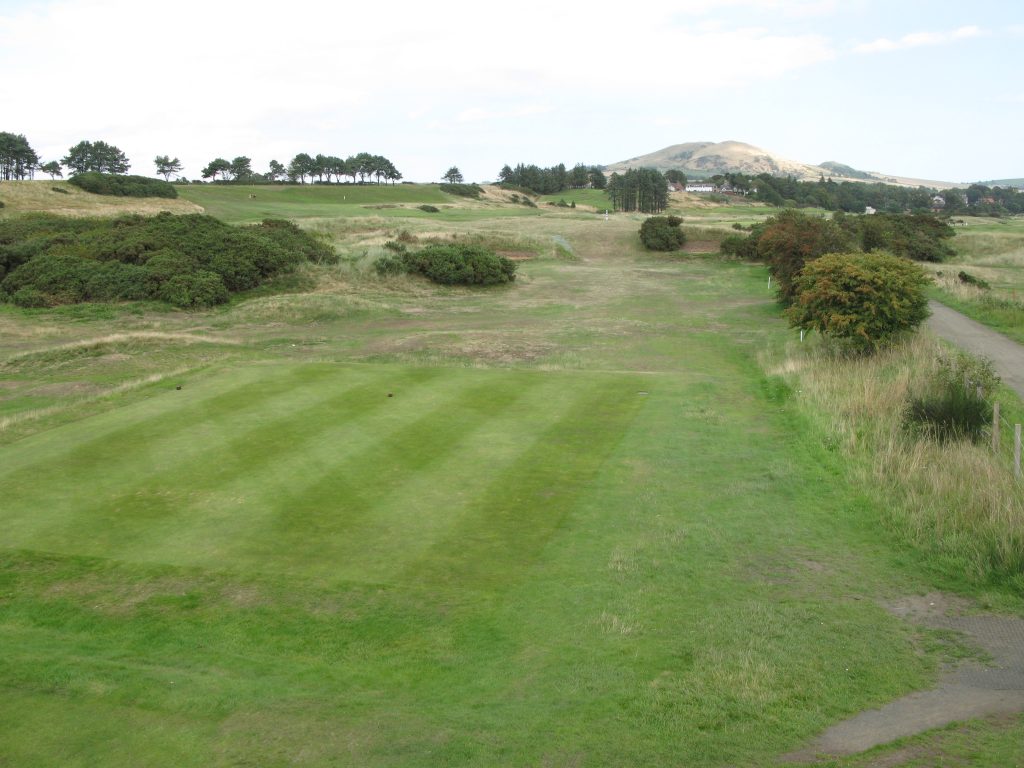 The view from the 6th tee, one of the short par 4s with a very tricky green.

The 10th hole was another of the typical strategic challenges;  the fairway is cut in two between the tee and green;  go left where no bunkers exist, but leave a blind second with the green side bunkering obscured, or go right for an easier approach shot, as long as you miss the well placed fairway bunkers.  A joy of a hole.

After playing the, arguably parkland, inland holes of 11 through 13, you reach a place arguably unique in world golf.  From the 14th tee, you can see every green on the course, along with a magnificent view of the Firth of Forth and the North Berwick coast in the distance.  This view is worth the green fee alone.  The 14th is also a great par 3, with a significant drop, so club selection is key to this hole – it’s better being long than short here by the way.

After a nice set of par 4s, you come to the very difficult last hole, a long par 4 played to a long and slightly raised green that slopes from back to front in front of the terrific clubhouse.  I think the number of visiting golfers that find this green in regulation will be low;  plus the sting in the tail is that it has a very difficult green to finish.  I ended up with an 8, having put my second OOB to the left. 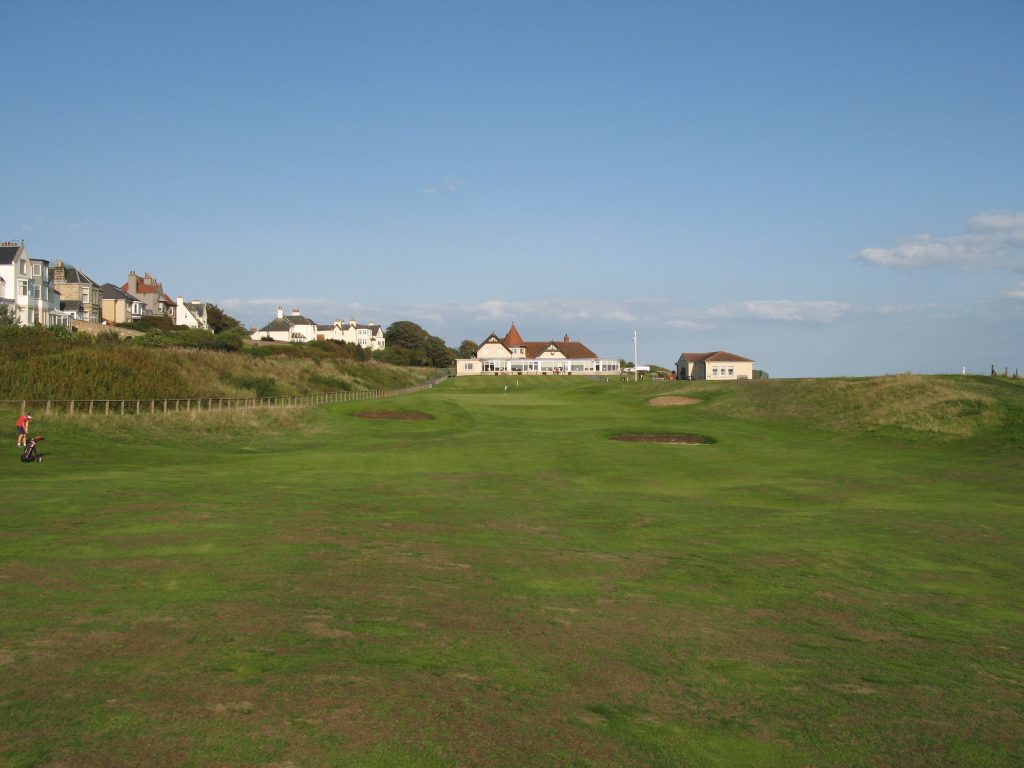 The difficult long par 4 18th hole, in front of the lovely Lundin clubhouse.  Moira, seen here playing her approach, having just stayed in bounds on the left.

People say that Lundin is a “gem”, but I disagree.  Its much better than that;  for me, the term “gem” has evolved into one used to describe “great courses, but somewhat unknown or off the beaten track”.  Lundin is very much on the well trodden track, is a merge of architectural significance by 2 of the greats, and it is a joy, for many reasons.

A must play Scottish golf course.   Buy the Course Guide, and study the holes! 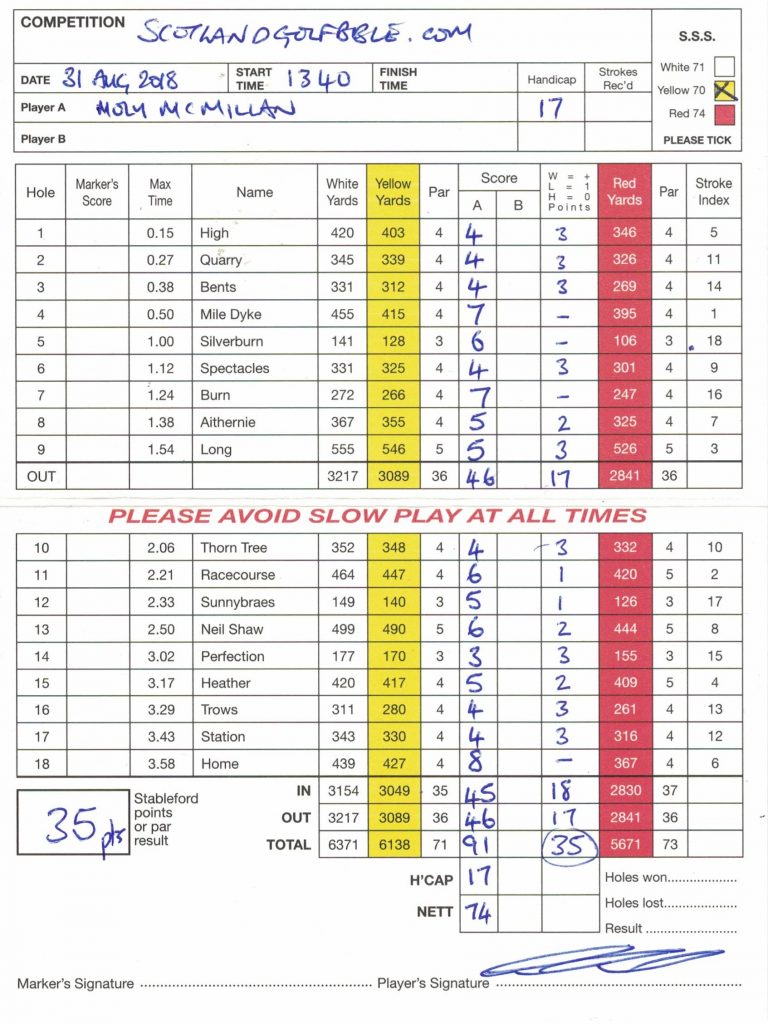 Moly McMillan lives in Broughty Ferry on the east coast of Scotland. He is a self employed business consultant and devotes some of his time to achieving his life long ambition - to play every golf hole in Scotland, every single one!
View all posts by Moly McMillan →
This entry was posted in 18 holes, 1851 - 1900, 4 star, 5 star, Course Architech, Course Owned By, Course Quality, Course Type, Holes, James Braid, Links, Members, Old Tom Morris, Overall Value, Price, Region, The Kingdom of Fife, When Course Established, £60 - £79. Bookmark the permalink.