Posted on September 3, 2018 by Moly McMillan

This brilliantly located course, with great countryside views, is a tough 18 hole undulating walk – I wonder whether in time the club may reflect it should have stayed as a 9 hole layout?

Dunkeld and Birnam Golf  Course is just a few miles east of Dunkeld, in the village of Birnam,  in what the club describe on their website as “Highland Perthshire”.    Birman and Dunkeld were actually different villages set on opposite banks of the river Tay, until they were connected in 1809 by a Thomas Telford bridge.  It is in an area of outstanding beauty, and I suspect many visitors may decide to play golf whilst on holiday. 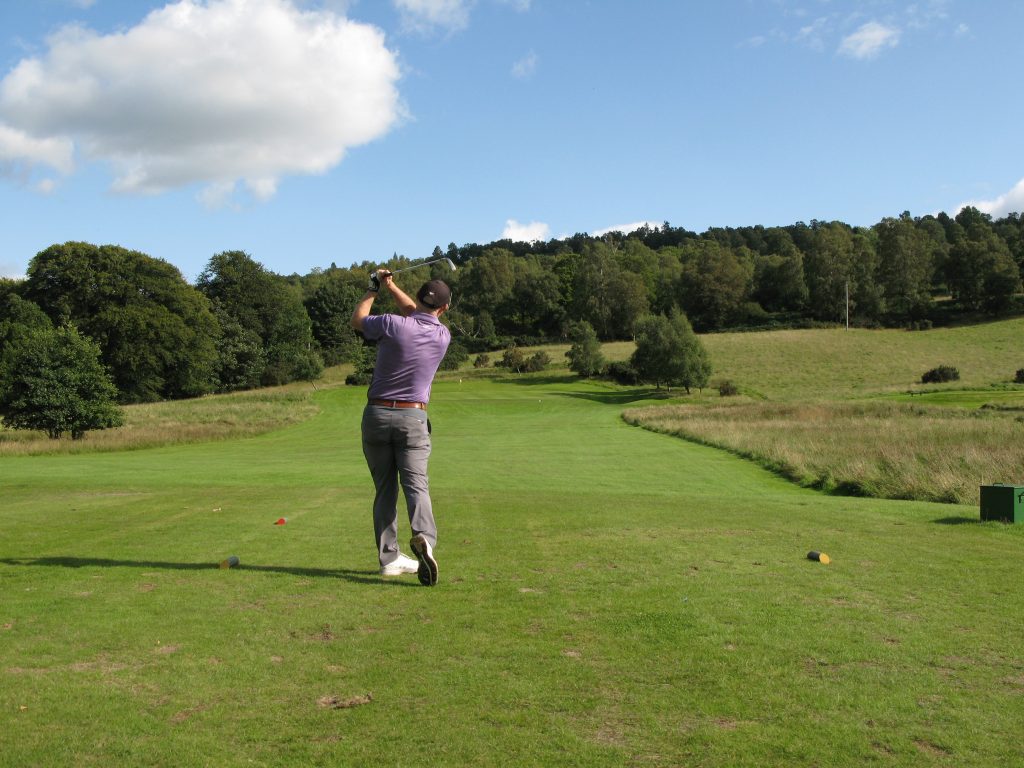 The course was designed by Old Tom Morris in 1892, and was only extended to 18 holes in 2000.  The new holes are very much more open parkland, and slightly out of sorts with many of the original holes, which provide some typical “highland” holes.

The new layout also caused a change in the hole order, with the 17th and 18th (both originally part of the 9 hole course) being 2 of the 4 par 3s of the 18 hole course.  This makes for a rather unbalanced course in my view.  With the increasing debate about 9 hole golf competitions, as a means of encouraging play, I wonder whether Dunkeld and Birnam should have remained a 9 hole course?  I certainly think there is a charm in the “highland 9 holer”, which arguably has been lost. 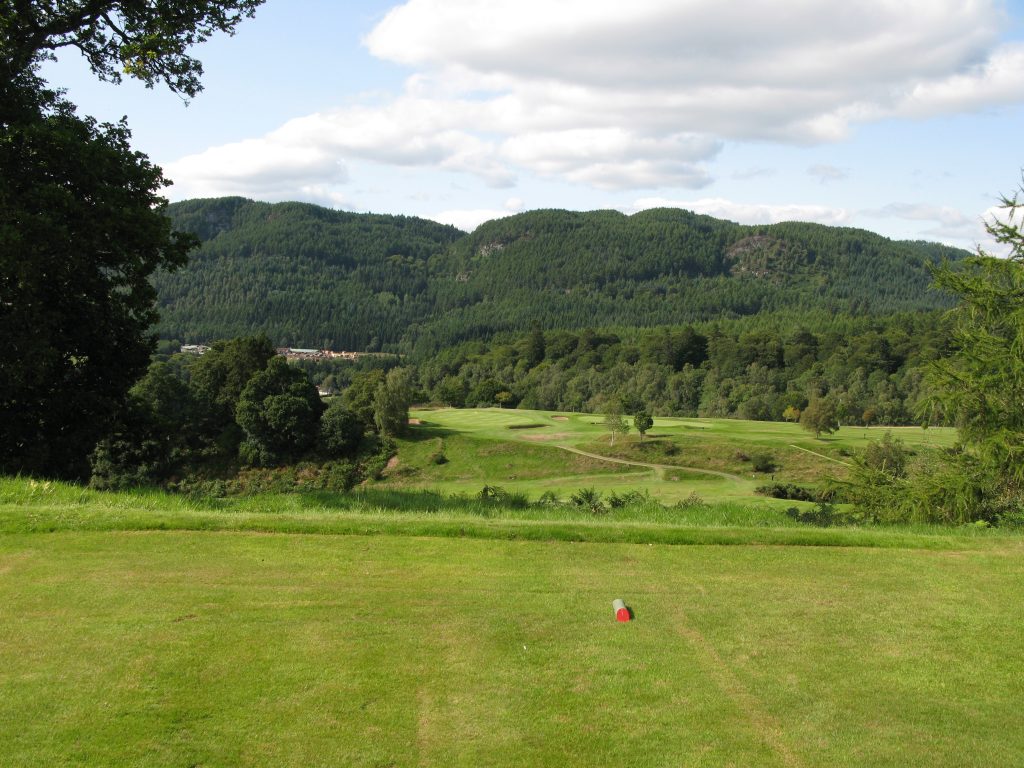 The risk reward par 4 6th hole, with the picturesque surrounds.

The course is relatively short, but it feels much longer, due to the many undulating holes, and there are a couple of fairly long walks between green and tee (the 7th to 8th being the longest, between the old and new holes).  The walk up to the 18th green warrants a buggy hire in its own right and, thankfully, there are several available for hire. 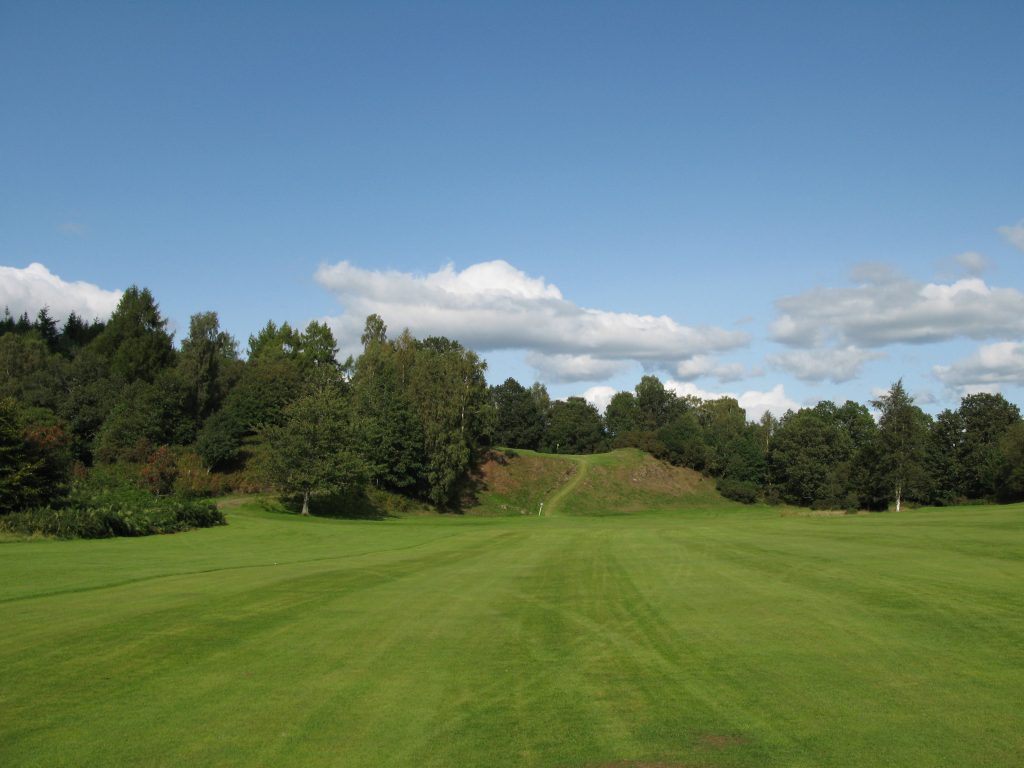 Having said all this, which might be unfairly critical, it’s really well worth the visit to play Dunkeld and Birnam.  The overall condition of the course was excellent and the greens were lovely.  The views were outstanding, including overlooking Dunkeld and taking in The Loch of the Lowes, and I think that playing in early Autumn must be particularly spectacular, due to the many trees surrounding the local hillsides.  It is an area renowned for local bird life. 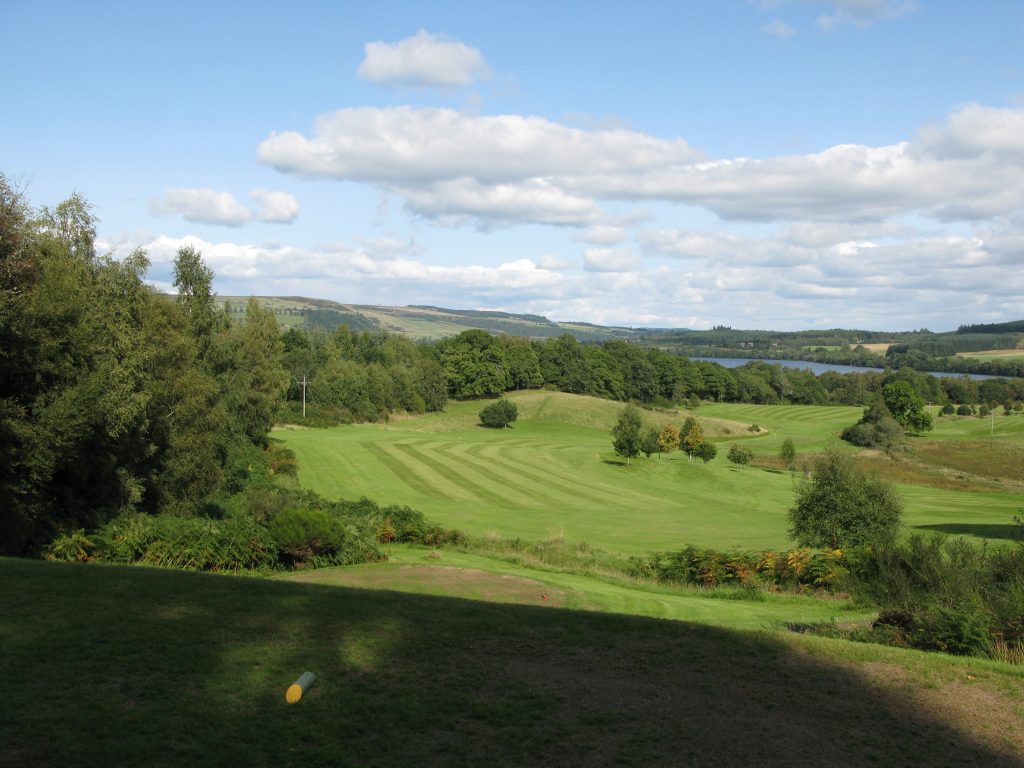 The 9th tee, with The Loch of the Lowes in the distance.

Even if not playing golf here, the Golf Club has a really nice clubhouse, with beautiful countryside views and would be nice to visit for the good food also on offer.   The members were very friendly to Fran and I, and they were very proud of their club.   They are also an enterprising club and have an apartment for rent in the clubhouse. 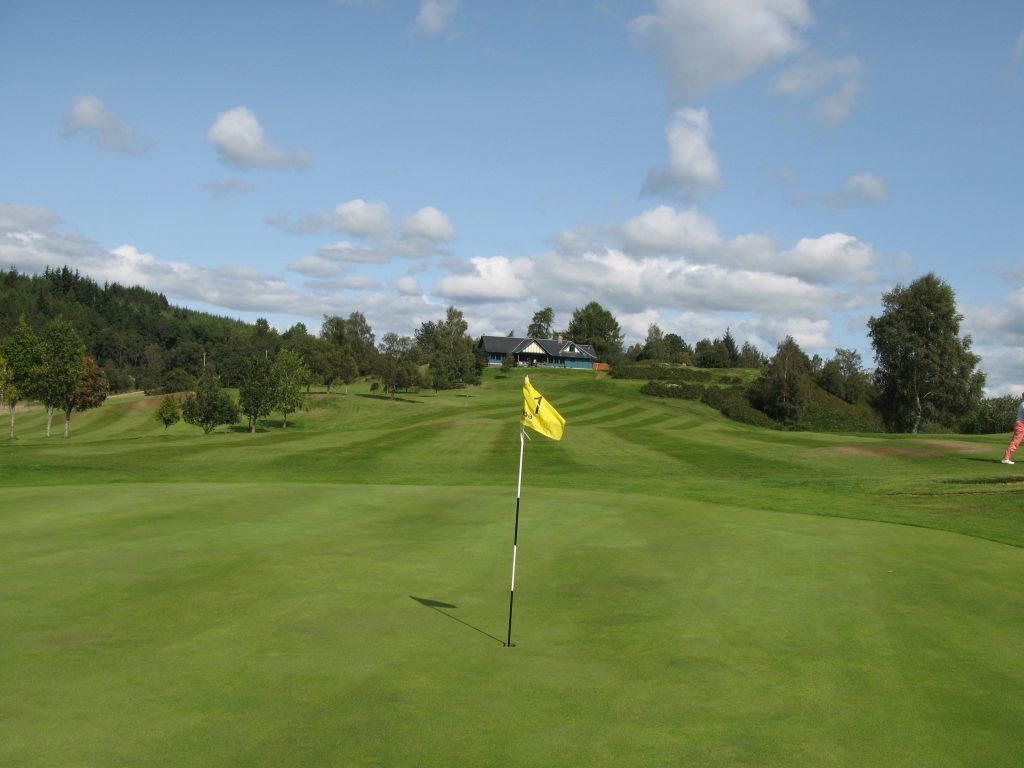 The course has some very interesting holes, and also several short par 4s which present the classic risk and reward dilemma, no more so than the 6th, one of several drive-able holes; on the day I stuck to a conservative strategy, albeit my scoring (91 for 33 points), may indicate I should have played driver more often!

The best hole for me was the SI3 7th hole, where a mid iron is likely needed to a raised green surrounded by trouble.    I suggest you play more club than you think towards the left side of the green. 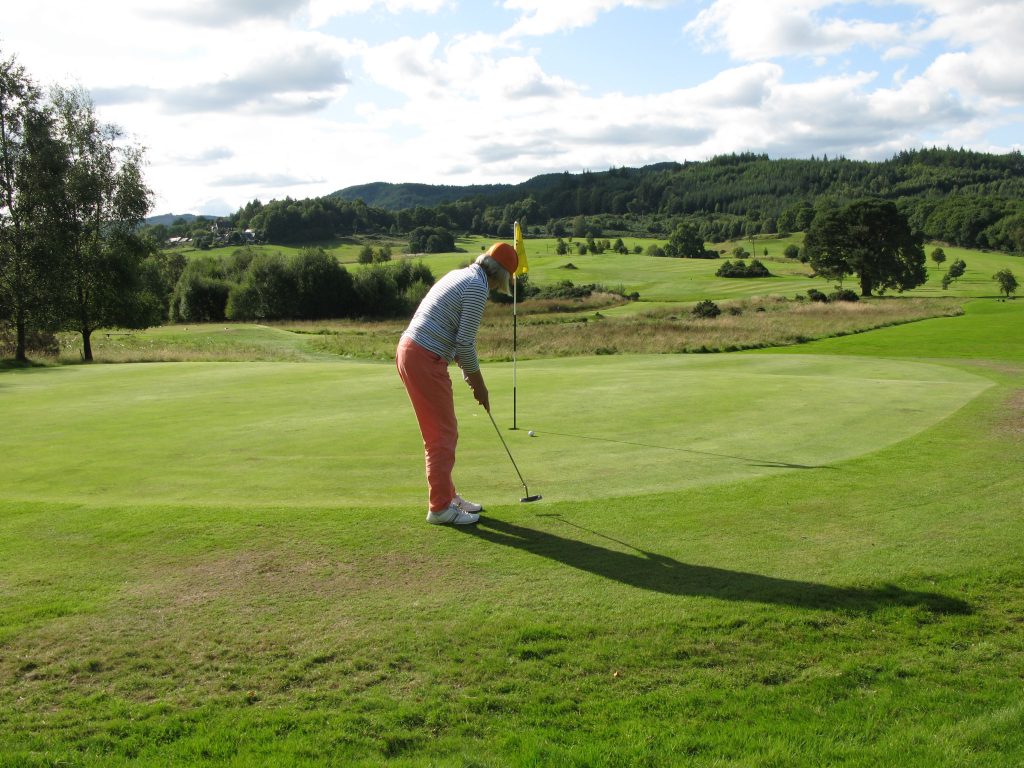 Fran putting at the 11th at Dunkeld and Birnam

Worth playing Dunkeld and Birnam, not least for the friendly welcome and the outstanding views from the clubhouse, over the tipple of your choice. 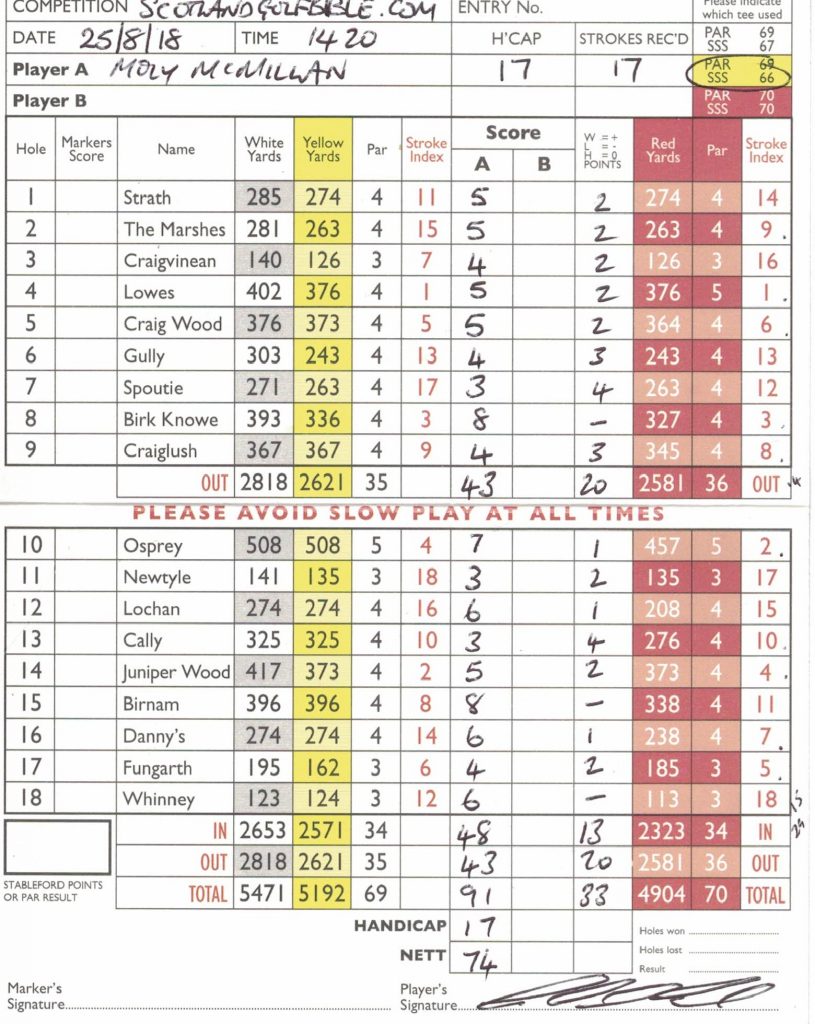 Moly McMillan lives in Broughty Ferry on the east coast of Scotland. He is a self employed business consultant and devotes some of his time to achieving his life long ambition - to play every golf hole in Scotland, every single one!
View all posts by Moly McMillan →
This entry was posted in 18 holes, 1851 - 1900, 3.5 star, 4 star, Course Architech, Course Owned By, Course Quality, Course Type, Heathland, Holes, Members, Old Tom Morris, Overall Value, Perthshire, Price, Region, When Course Established, £20 - £39. Bookmark the permalink.