Excellent vistas, with some memorable holes, but clearly an overplayed course and a little worse for wear.

The seaside town of North Berwick, about 25 miles east of Edinburgh, sits along an outstanding coastline that is home to many renowned and world class golf courses, helpfully listed in the East Lothian golf website here.

The Glen golf course sits on the east of the town, and has historically been called “East Links”, to differentiate it from its more westerly and much older “West Links” neighbour, North Berwick golf course, which is one of Scotland’s great championship golf courses. 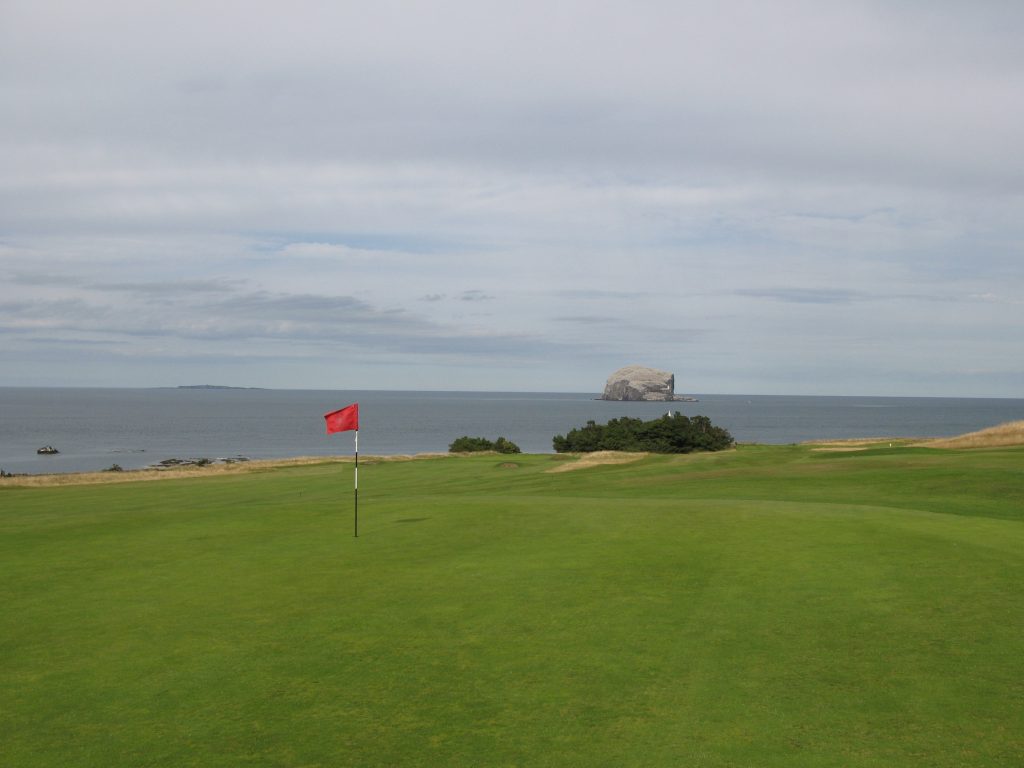 The Bass Rock from the 10th tee at The Glen.

The North Berwick “West Links” golf club actually opened in 1832.  Demand for golf expanded rapidly towards the latter part of the 19th Century along with the expansion of the railways and the increased wealth and leisure time which came from the Industrialised age.  A second 9 hole golf course to meet this demand was laid out in the east of the town in 1894, designed by Ben Sayers, the legendary Scottish golf professional and club innovator, who played a match to mark its opening.    Then, only a little over 10 years later, Sayers again, this time in conjunctions with James Braid, oversaw the extension to 18 holes, of what is now The Glen golf course. 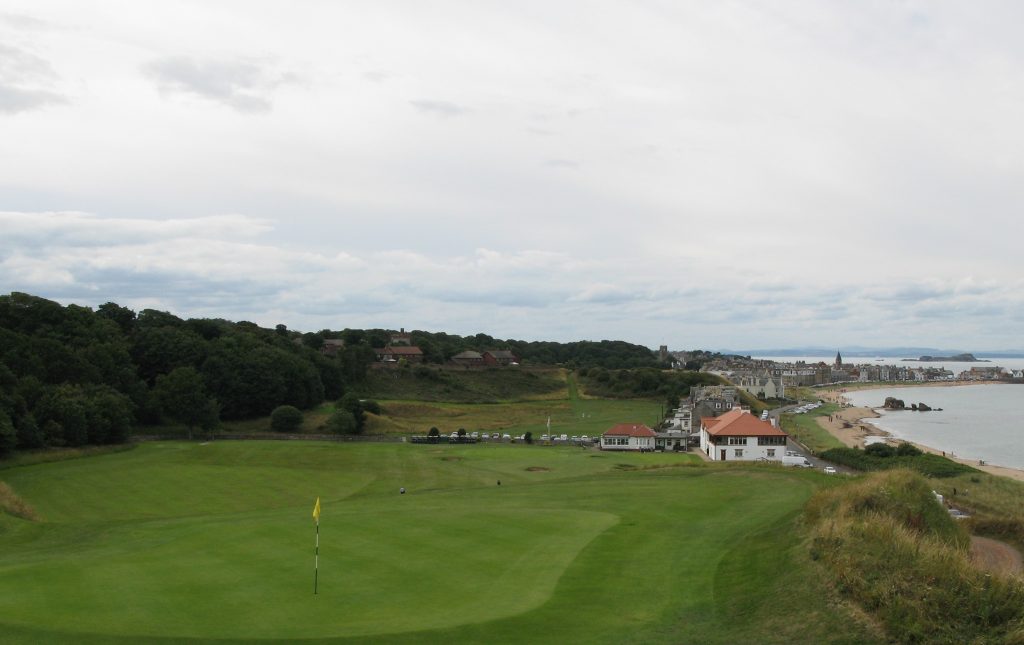 The view from the 1st green at The Glen towards the nice clubhouse.

The course is dominated by the views of the Bass Rock, one of the several islands which dot the outer part of the Firth of Forth.  The rock can appear almost fluorescent in the correct light, which is the result of the white droppings of the large colony of gannets which inhabit it. 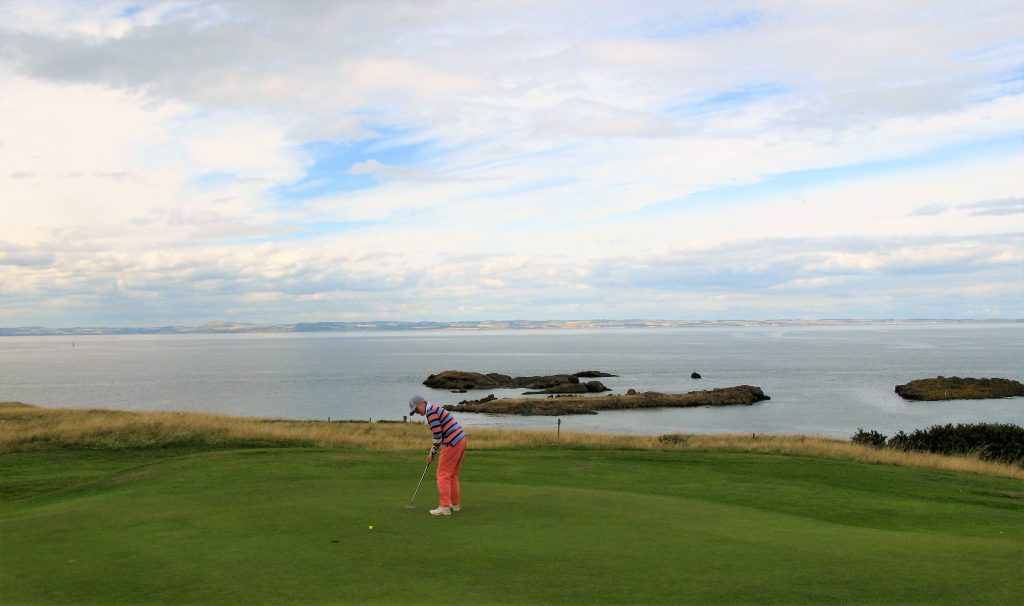 Views North towards the Fife Coast from the mid iron par 3 4th hole, where Fran and I both kept right as guided in the Course planner!

In fact, the coastal views from the course are among the best in Scotland, extending far north to the Kingdom of Fife; however, they serve as a rather flattering deception as many of the holes of the course are in my opinion pretty bland.  In particular, the several holes on the inland most side of the course are built on arable turf and don’t feel particularly links like at all. 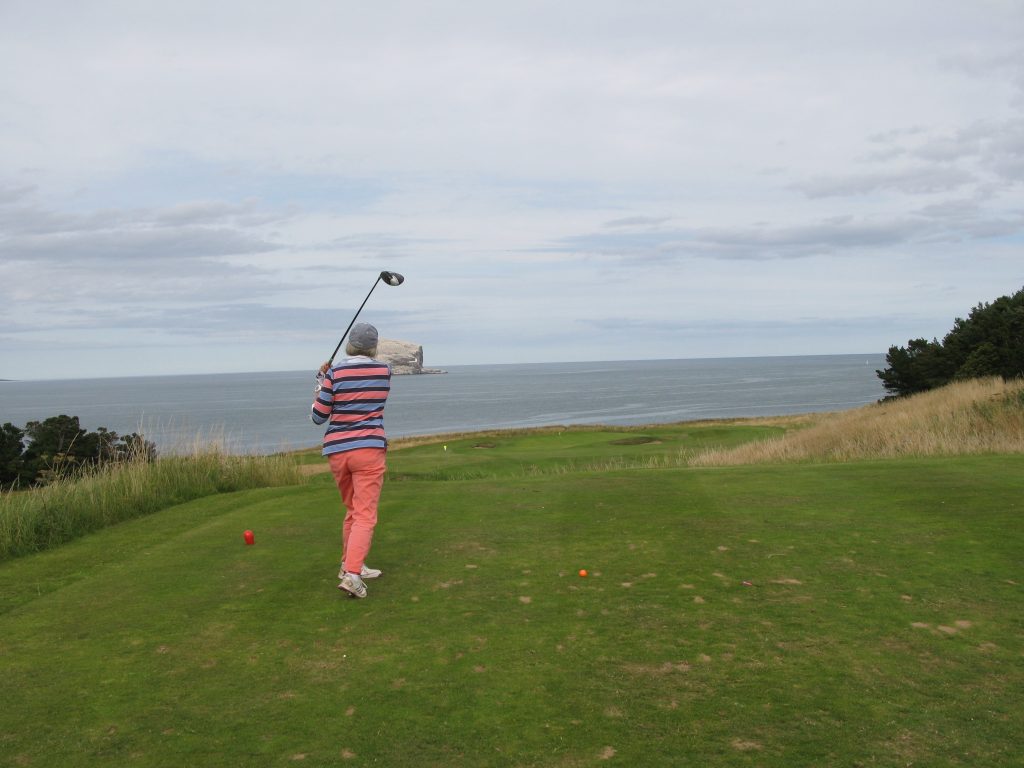 Fran at the 9th, with a view of the typically worn teeing ground.

The course is basically an out and back layout, and starts with one of the most challenging holes, which after a fairly innocuous drive to around 200 yards, requires an uphill shot to a blind green – take at least 2 clubs more than normal, as the green is very long.  If you just get to the top of the hill, you’re faced with almost an inevitable 3 putt!.  This brings me to the greens – they were in good condition but seemed to have a great deal of variability of pace, which I never got used to and I three putted 8 times, which I think must be my record.

The course was otherwise in fair condition, except for the tees which were really very poor, and a clear sign of the amount of play throughout the summer – granted, the dry summer may not have helped the green keepers.  Nevertheless, the high amount of golf played is a really good thing, as golf in Scotland is in general decline.  I think The Glen provide a nice welcome and the facilities and clubhouse are new and very good, another sign of the general wealth on the coastline. 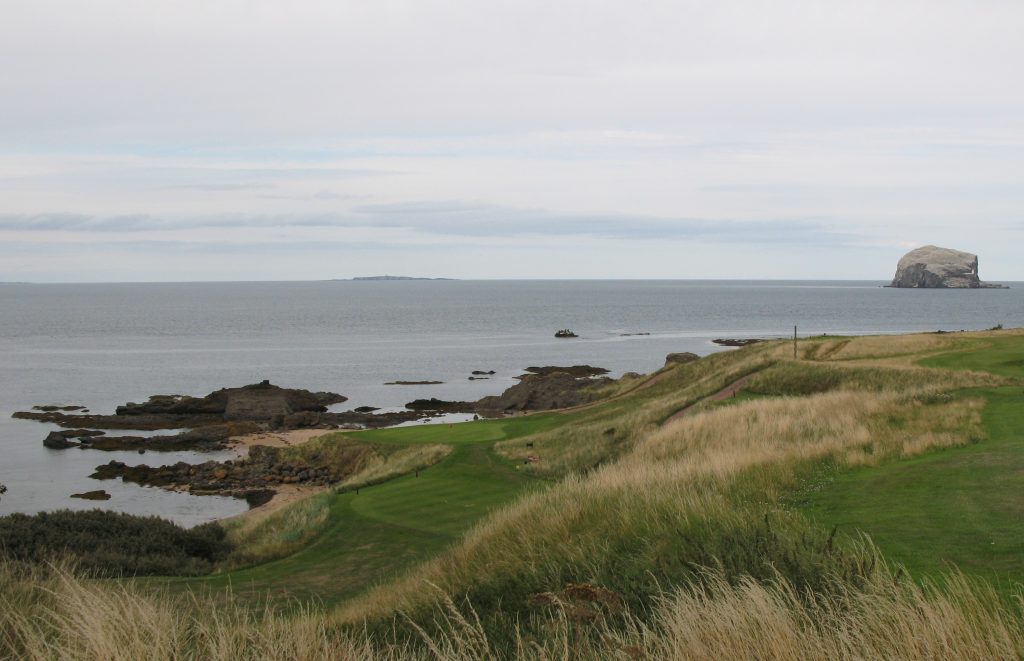 The signature par 3 13th green here seen from a distance. Note the hole is not played in this direction.

The course does have some excellent holes, and some very challenging ones, in its 6000+ yards locker.  The best known is its signature hole, the 13th, which has been likened to the famous short 7th at Pebble Beach in California, which if you look at comparable pictures is not unreasonable.

Other than my putting I had an excellent day, scoring 86, having hit 10 greens in regulation;  this was greatly helped by the pretty wide fairways the course has.  The nicest thing was having a birdie 2 at the signature hole.

It’s worth playing The Glen, but if possible I would think that early season would be a time the course is at its best before the Summer visitor season.

Some excellent play for 86 at The Glen; but included 3 putting 8 greens!

Moly McMillan lives in Broughty Ferry on the east coast of Scotland. He is a self employed business consultant and devotes some of his time to achieving his life long ambition - to play every golf hole in Scotland, every single one!
View all posts by Moly McMillan →
This entry was posted in 18 holes, 1901 - 1945, 3 star, 3 star, Ben Sayers, Course Architech, Course Owned By, Course Quality, Course Type, Edinburgh & The Lothians, Holes, James Braid, Links, Members, Overall Value, Price, Region, When Course Established, £40 - £59. Bookmark the permalink.