Posted on September 9, 2016 by Moly McMillan

Broomieknowe golf course sits in the former village of Broomieknowe now part of the town of Bonnyrigg about 8 miles south east of Edinburgh.  The origin of the name Broomieknowe escaped my searching. 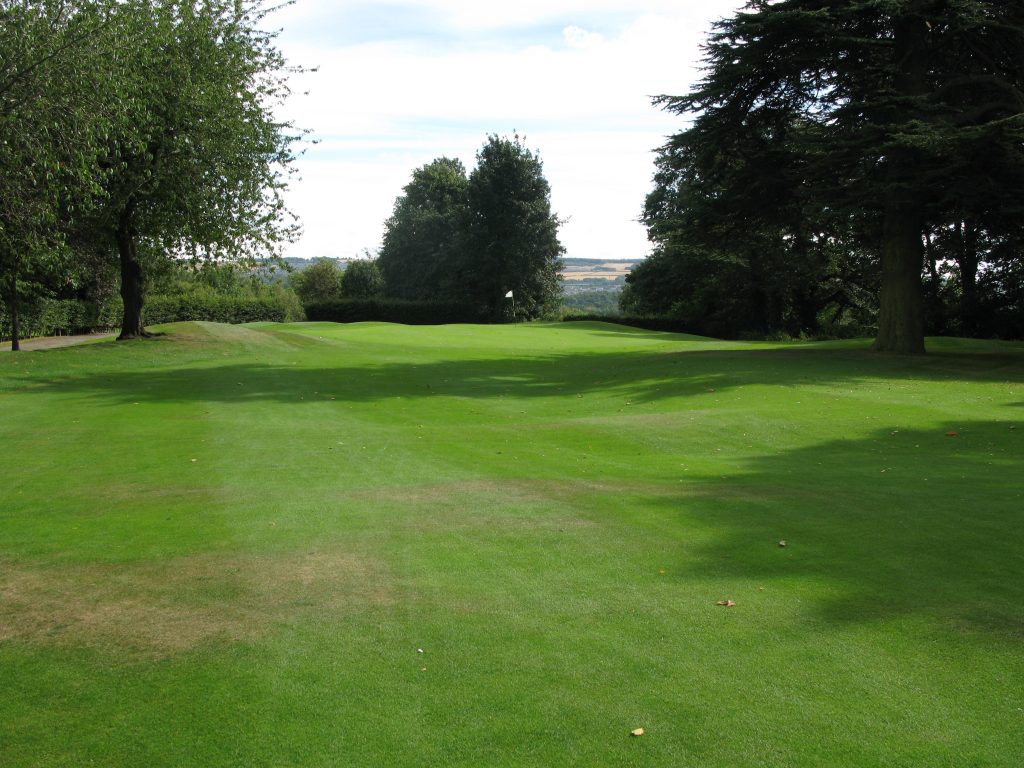 The snuggly placed green at the 4th at Broomieknowe

The course was designed by North Berwick’s professional Ben Sayers in 1906 and extended in 1933 by James Braid, but had to be significantly altered in the late 1980s to accommodate the A7 Edinburgh to Scottish Borders road with 5 new holes being built. When playing you really recognise the diffent maturity levels of the course. 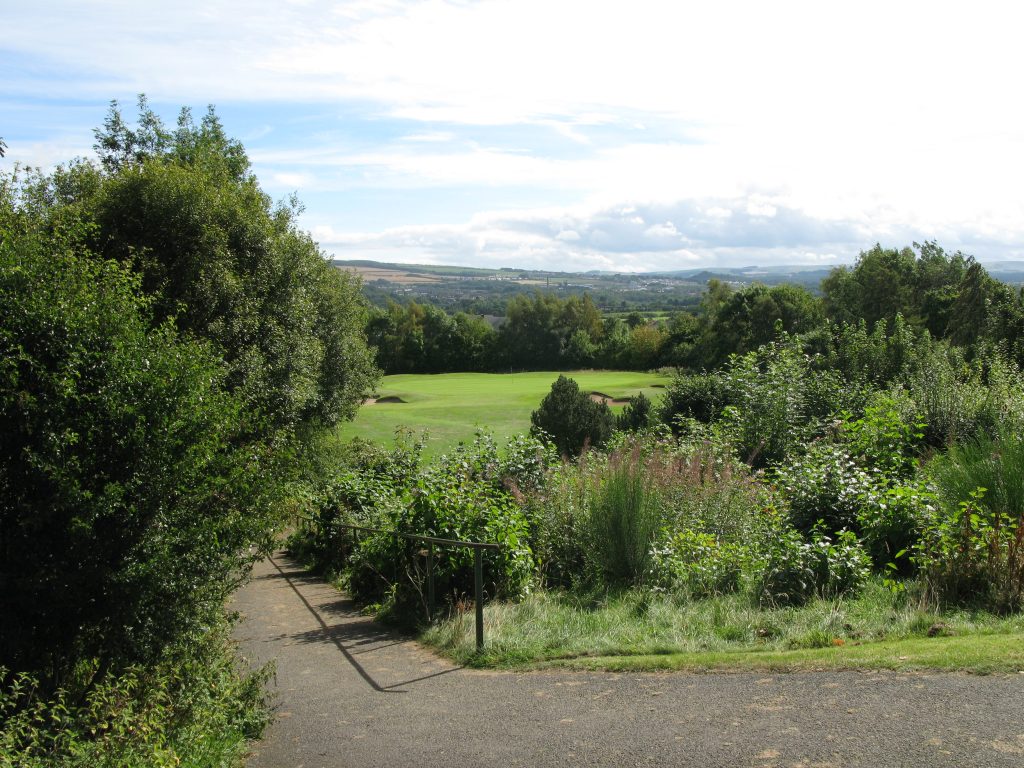 The par 3 5th at Broomieknowe, with the only nice views from the course.

This is very much a typical parkland course and has “nice” greens, “nice” fairways, “nice” bunkers;  in fact everthing was “nice”.  However, nothing was really memorable, except the 4-ball playing ahead of me, that despite having no-one ahead of them only let me play through after about 8 holes when 2 of them had lost balls.  I had planned to have a drink afterwards, but all the bar noise was from “The Members'” bar, that exclusive part of many golf clubs where members sit and discuss “Why golf clubs are dying?” – perhaps getting rid of the “Members'” area would be a good first step? 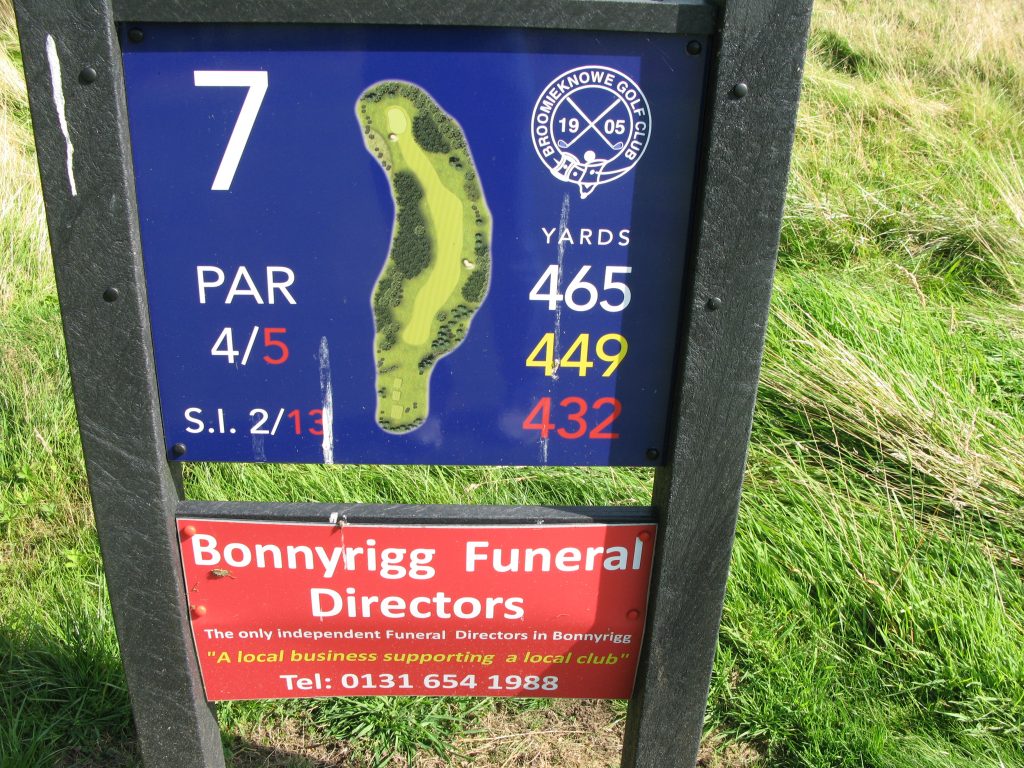 At least the members at Broomieknowe have a sense of humour: the “deathly” 7th sponsored by the local funeral director!

The card of the course was a little unvaried with only three par 3s, with the rest par 4s, although the long 8th played as a par 5 from the white tees.  The course was pretty private with significant views only at the par 3 5th hole.  There were several short par 4s that offered good birdie opportunities, but the highlight of the course for me were the several long par 4s, in particular the 7th, 8th and 12th.  Indeed the 7th was a dog leg left with the apex at about nearly 250 yards, and is effectly a par 5 for medium or short hitters.

As I said the course was in “nice” condition, and the greens were true but a little slow and several of the new greens were very flat. 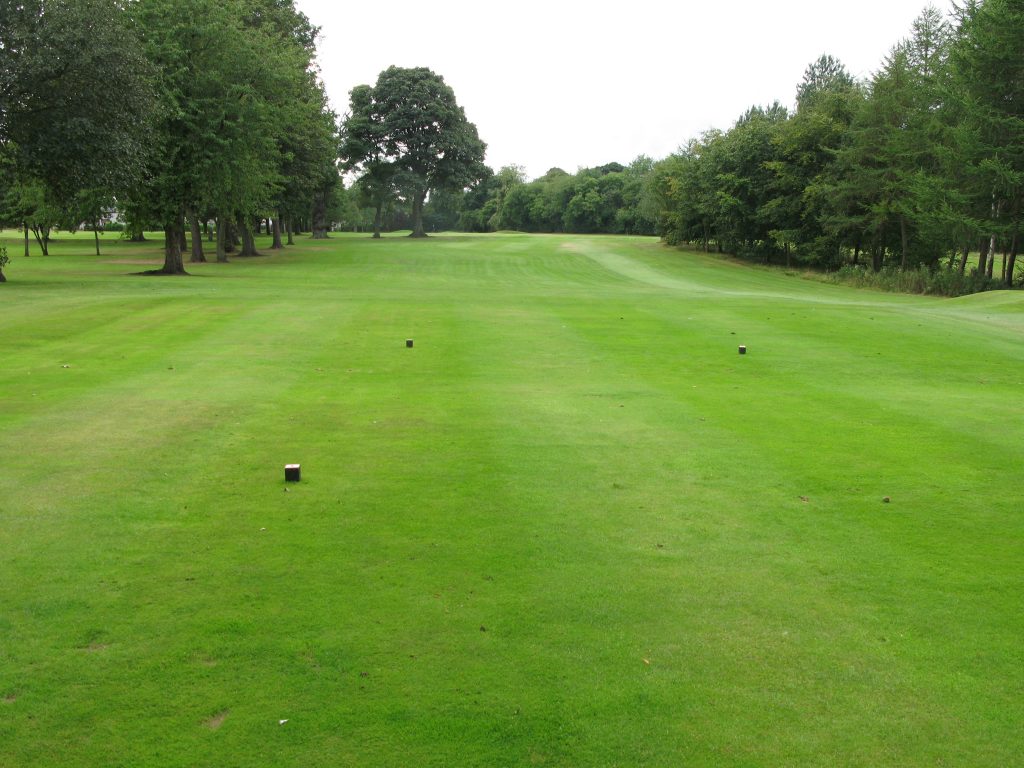 The 16th at Broomieknowe, a typical hole on this “nice” course.

The golfing Gods took some revenge on me;  playing off my new handicap of 16 having recently won a Monifieth medal, I crashed to a 97, only 28 over par – I succummed to a 9 at the 8th.

Never mind, I had a “nice” time and I would play again at Broomieknowe as it was pretty “nice” value. 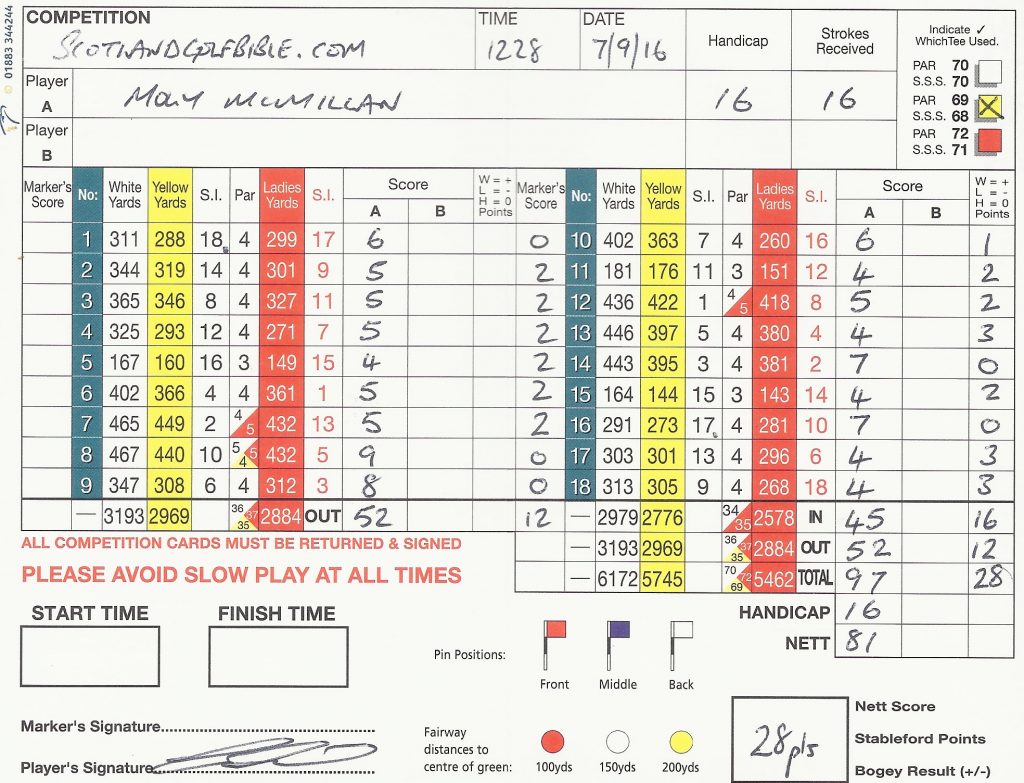 Moly’s first scorecard off new handicap of 16; 28 over par!

Moly McMillan lives in Broughty Ferry on the east coast of Scotland. He is a self employed business consultant and devotes some of his time to achieving his life long ambition - to play every golf hole in Scotland, every single one!
View all posts by Moly McMillan →
This entry was posted in 18 holes, 1901 - 1945, 3 star, 3 star, Ben Sayers, Course Architech, Course Owned By, Course Quality, Course Type, Edinburgh & The Lothians, Holes, James Braid, Members, Overall Value, Parkland, Price, Region, When Course Established, £20 - £39. Bookmark the permalink.